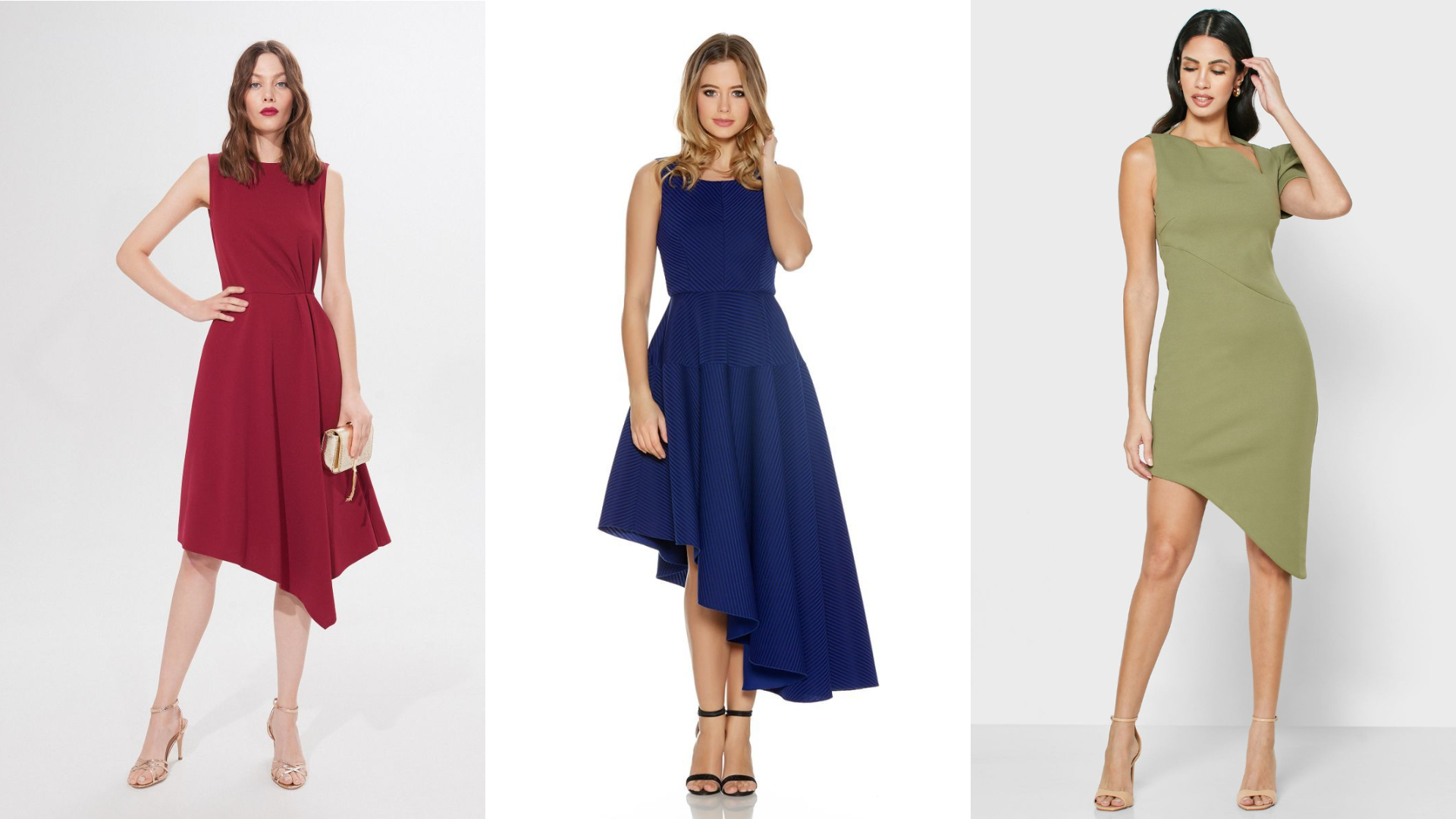 A Quick Guide on Asymmetric Dresses: The High Low

In the era of individuality and loving oneself, trends are no longer bound on the barriers of being updated and just looking like your favorite celebrity. Instead, it has evolved into a celebration of oneself. That is, taking a trend and owning it. Today, fashion extends more to than just style but meaning and in 2018, a fashion trend has swept over casual streetwear up to the catwalks of high-end fashion designers that take all of those into a detail: asymmetry.

According to Keren Brown, “Humans are drawn to asymmetry; it’s edgy, bold, and says one thing loud and clear: I don’t need to be like everyone else.”

Asymmetry characterized as a type of dress is defined by its slanted hemline or neckline with the most common and popular designs featuring a one-shoulder bodice. The degree and variation of the slant vary greatly and can range from a subtle slant in one direction to more conspicuous slants which can go both ways and peak at the centre.

Aside from its strong sense of individuality, asymmetry is also often associated as gender neutral owing to its edgy vibe which Brown notes “takes away the need for it to be tailored to the shape of a woman’s body or a man’s body, while signifying a freedom from gender that’s actually refreshing.” And that same edgy accent also shifts the asymmetric look into a mature and experienced vibe.

The asymmetric style originated during the Victorian era where the hem style was first called as “fishtail”. Its easily distinguishable main feature is a “flowing, scalloped hemline which is often longer at the back than at the front.” Most designs are floor-length but variations also include knee-length and shorter skirts. These are usually worn by wealthy women both as an evening and day wear.

Its popularity continued mid-1870s and then reappeared by the 1880s and later on became a staple detail in women’s formal gowns and evening dresses particularly during the late 1920s until the early 1930s. By 1970, asymmetrical dress style rose to the forefront of fashion when American designer Roy Halston launched a series of dresses which featured the style in an eye-catching design blending the concept of elegant cocktail dresses with Grecian gowns.

Couture designers followed suit and by 1980s, the asymmetrical style peaked in popularity but had been later on replaced with more traditional cocktail style dresses during the 1990s.

Asymmetrical dresses best fit petite women (those who are shorter than 5 feet 3 inches) with a slender body type. The main advantage of an asymmetrical hemline for women under this category is that it gives the illusion of elongation with a more exposed leg thus making someone as short as 5’3” stand like a 5’5” model.

It also works for women who have athletic figures or those who have curves but not full enough to look like an hourglass. This body shape needs dresses that enhance their curves through an extra drape of fabric or uneven patterns like the slanted hemline of an asymmetrical dress.

After 1980, the popularity of asymmetrical dresses slowly faded away. It was in 2010 when the style reappeared on the catwalks and was worn by many celebrities and models alike such as Kate Moss which eventually led it back into the fashion arena.

To celebrate her line of handbags for Longchamp (a French luxury leather goods company) which was released in February 2010, Kate Moss attended the launch party at the Ritz Club in Paris wearing a black lace Valentino dress from the Resort 2010 collection.

But instead of the original knee-cut dress, Kate chose to wear a shorter and sexier version, exposing her long legs. The dress has a layered neckline with a visible asymmetrical sash detail and scalloped bodice which was then layered over with a cropped white jacket and finished off with black pumps.

In late 2011, the asymmetrical dress, specifically the high-low skirt, became a trend in Europe and America. The trend eventually became a worldwide fashion style which graced the runways during the Spring and Summer 2012. Outside the fashion circle, the asymmetrical dress reached a wider audience after contestant Devyn DeLoera wore a peach-coloured high-low skirt for her blind audition for The Voice Season 3 (and if you haven’t watched yet, she got recruited to Team Christina!)

In 2015, supermodel Kendall Jenner stunned in the one-shouldered asymmetrical gown by Romona Keveza at the amfAR gala in New York City. The dress featured a fitted silhouette and a thigh high slit.

And it looks like Kendall is on a high for asymmetrical dresses as she was spotted wearing a red Halston Heritage dress at the 2015 Fragrance Foundation Awards in Los Angeles, California. The thigh high slit (which apparently is also one of her favorites for this year) bared her toned leg. Her shoulders were also exposed in an asymmetrical fashion with a cutout on a sleeve on one side and sleeveless on the other.

Capsule Wardrobe 2021: A Quick Guide on How to Create One

Kendall added a metallic to her radiant red ensemble and finished her look with a pair of strappy black heels. Overall, the supermodel imbibed the modern update on the ‘70s silhouette thanks to the cutouts, the length, and the figure-hugging fabric.

The style had also notably received fashion press coverage in India such as in the fashion labels Namrata Joshipura. In 2017, Indian actress Kriti Sanon rocked Namrata Joshipura’s sequined striped dress with an asymmetrical hemline and a waist cutout detail at the premiere of the Sachin Tendulkar biopic. She completed her look with a pair of ankle strap sandals, minimal accessories, nude lip shade, and soft curls.

Kriti Sanon started her career as a model and made her acting debut with Sukumar’s Telugu psychological thriller film 1: Nenokkadine. In 2015, she won Filmfare Award for Best Female Debut for her first Bollywood film, Heropanti.

Last 2016, Michelle Obama graced the August 23 cover issue of Variety in a custom-fit style from Jonathan Simkhai’s pre-fall collection photographed by Art Streiber. According to Simkhai in an interview with WWD, “It was a huge honor and brand milestone to work with Michelle Obama’s team on a custom dress for the cover of Variety. Michelle represents the definition of a strong, fearless, inspiring and truly elegant First Lady, and seeing her in one of my dresses was a dream come true.”

The T-shirt dress created by the New York-based designer featured a “contrast geometric mesh trim and an asymmetrical hemline”. Simkhai who launched his label back in 2010 was named winner of the CFDA/Vogue Fashion Fund in 2015 and is also known for his signature fit-and-flare macramé lace dresses.

And just a year ago, Eva Longoria wowed everyone at the Cannes Film Festival when she wore a custom-made blush satin gown by Alberta Ferreti featuring sequin embroidery and a draped bustier at the opening ceremony of the red carpet premiere of horror flick ‘The Dead Don’t Die’.

The dress was also a beautiful amalgamation of contrasting elements with an asymmetric design and a “corset appearing in stark contrast to the billowing silky pink train and draped bardot sleeve.” Not only that, Eva also showed off her beautiful sexy legs through a thigh-high slit! 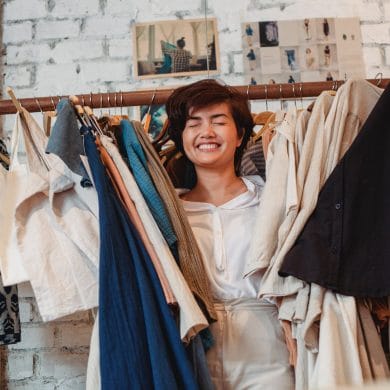