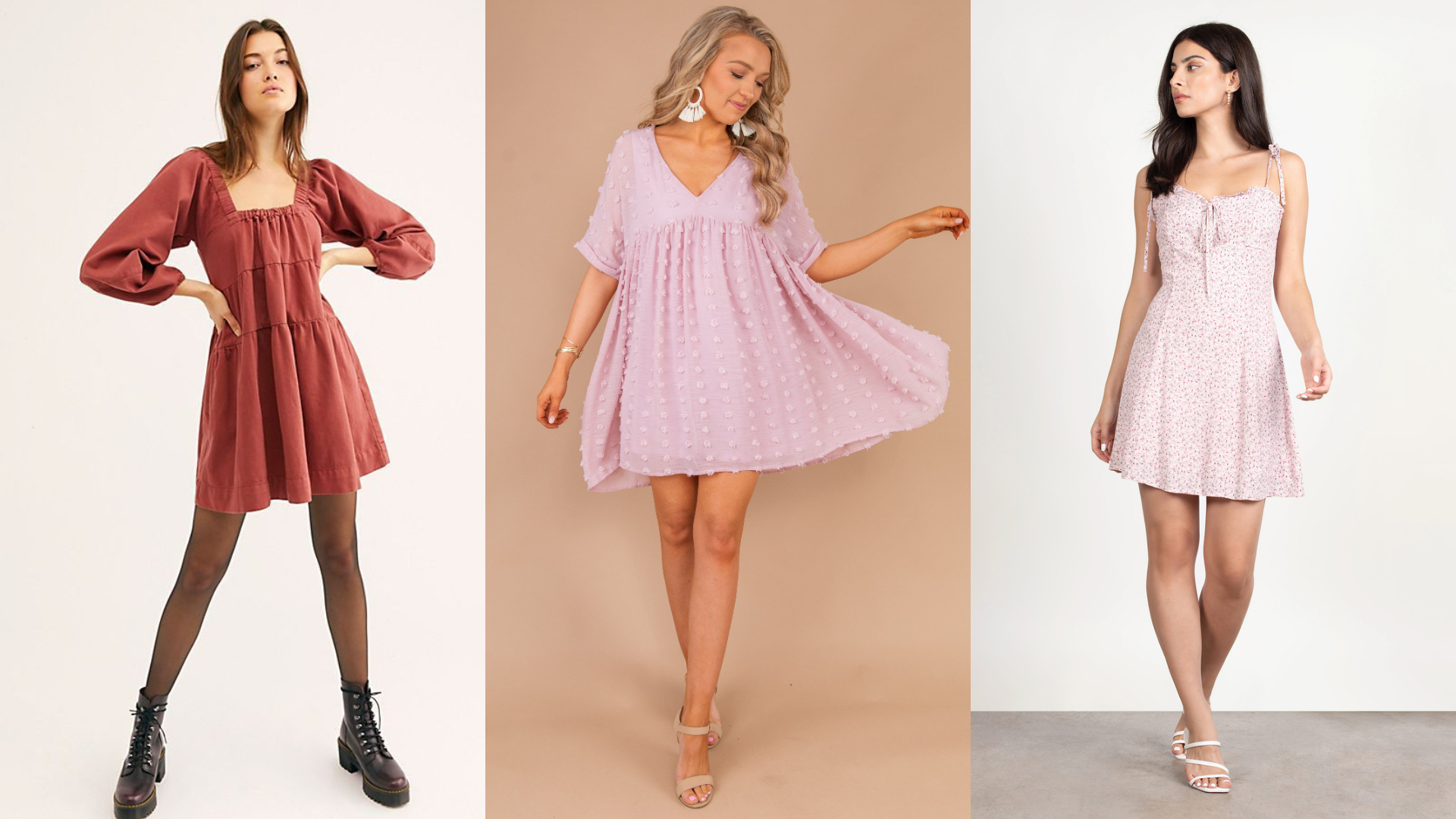 A Quick Guide on Babydoll Dress: The Lolita Weirdness

The blast-from-the-past trend had recently revived the babydoll dress trend alongside scrunchies, ruffle-embellished socks, barrettes, and anything that we would have worn 15 to 20 years ago or if you’re a ‘90s kid like me, that would be the age when we were just playing without care or saving Paint files on a floppy disk (which this generation would never understand). I really couldn’t say much about my fashion statement that early because I definitely had none.

Merlette founder Marina Cortbawi said earlier this year, “What we wear always reflects the times we are in.” She noted that the revival of the babydoll was not just a simple coincidence. Merlette is a Brooklyn-based brand who became very popular among influencers back in 2016 with the hype for their “voluminous multi-tiered Soliman midi dress. She said, “I believe that loose-fitting silhouettes are being revisited now because women want to experience freedom and fun, a garment that supports movement.”

But for 2020, the design is taking on a more conservative yet freer look unlike the ultra-mini and tulip-like characteristic of the ‘90s. According to Cortbawi, the babydoll trend that entered the fashion circuit this year “evokes ease and the feeling of being unbound in the garment.”

Babydoll dresses were first created back in the 1940s by American lingerie designer Sylvia Pedlar in response to fabric shortage during the Second World War. The designs became popular and were quickly labelled as “baby dolls” which Pedlar disliked and she did not use that label herself. In 1956, the name became popularized with the film of the same name starring Carroll Baker in the lead role playing as a 19-year-old nymphet.

In the 1950s through the 60s, babydolls were worn as pajamas which consisted of a “top and a loose fitting short bloomer bottom with elasticized waist and legs” but was later on adopted as a daywear in the ‘70s wherein the design lost a bit of negligee for appropriation. Although it still retained its child-like characteristics so the design was basically high necks, long sleeves, short in length, swingy skirt often accompanied with an empire line.

By the early until mid-1990s, babydolls became a prominent part of what were then called as “kinderwhore” look — that is according to the urban dictionary “torn babydoll dresses, cigarette burned tights and biig boots……grungey with a little girl/whore type thing. smudgy eyes and messed up hair.. like you fucked all night and rolled out bed the next morning.” This aesthetic became popular due to the underground feminist punk movement, Riot Grrrl and grunge performers like Courtney Love and Kat Bjelland.

Babydoll dresses were considered as an “eroticized item of adult apparel” and often categorized as a form of lingerie which fully exposes the woman’s legs with some styles even deliberately emphasizing and exposing the breasts as well. Babydolls from the 1950s through the ‘80s have become a popular vintage collection.

Today, the style has evolved into a fashionable grunge streetwear fashion from the hybrid lingerie infused with little girl attire characterized with a snug fit across the shoulders fitted until the bustline and very loose from the bustline down. Some styles still recreate the swingy and super short version of the babydoll dresses while some have been exploring longer and more conservative lengths.

Baby doll dresses look best on spoon shaped body type. Spoon body type is also commonly known as the number 8 wherein an individual has a larger hip than the bust but with a well-defined waist. For spoon types, typically your best assets are your shapely legs.

This is why this body type looks so good with babydoll dresses. That is, the babydoll helps accentuate the bust line (since the top area until the bust line is fitted) to create a more balanced appearance and also gives the illusion of an hourglass figure. And again, the best asset of a spoon type is the legs and since babydoll dresses are generally short, it gives the best exposure for the legs creating a very curvaceous effect.

The loose bottom also helps draw attention away from the hips and any extra fats on the stomach.

Ariana Grande honestly qualifies as Queen of Bops and every single one of her title songs are just either something you’d play to a party or sing in the shower. Besides her music, Ariana is also known for her signature style and in 2018, she might be having some back-to-school moments because she is wearing babydoll dresses, thigh high boots and her high ponytail hair like a uniform.

When Ariana was awarded the Billboard Woman of the Year Award, she wore a Christiano Siriano strapless babydoll creation in lavender hue in a straight neckline. The dress which featured a bubble mini skirt was laughingly dubbed by Ariana herself as a “loofah”.

Christiano Siriano, a luxury womenswear designer, custom made this pre-Fall babydoll dress worn by Ariana which is giving us serious “God is a Woman” vibes. If you don’t know this fashion designer yet, he first gained attention in Project Runway Season 4 where he emerged as the winner and the youngest winner at that time.

Next on the list is the ultra short pink babydoll dress Ariana wore on “The Tonight Show Starring Jimmy Fallon”  designed by Cecilie Bahnsen. She wore matching hot pants underneath paired with a blush pink Le Silla “Eva” Stretch Suede thigh-boots. The look was completed by her signature high ponytail in a unicorn hairdo with a twisted braid down her center part. This look has been called as an ultra girly aesthetic adapted for her “Sweetener” album era.

Third on the list is the black babydoll dress with a full skirt (unfortunately, the designer has not been named) Ariana wore when she performed “No Tears Left to Cry” as opening for the 2018 Billboard Music Awards at the MGM Grand Garden Arena in Las Vegas.

She finished the look with her favorite thigh matching black boots, black net bow atop her high light blonde and pink ponytail, and of course a diamond choker. Ariana was then nominated for the Top Social Artist Award.

We also have Jennifer Lopez who turned heads with her black and white babydoll dress by Valentino paired with matching thigh-high black boots when she graced the promotion of her 2018 film Second Act. I am really digging this babydoll dress and thigh-high boots combination. This is probably one of the best styles for babydolls!

There’s also Rihanna who was spotted on “a leggy appearance” at the 2014 New York Fashion Show in a front-row attendance at the Adam Selman (Rihanna’s tour costume designer and behind some of her red carpet looks) Spring Fashion 2015 presentation. Riri was seen wearing a white babydoll dress, long pearl necklace, and rocking her all-white ensemble with a pair of Christian Louboutin Impera Lasercut pumps. This was definitely a look!

Selena Gomez was also seen wearing a daring strapless black babydoll dress paired with a feather boa when she arrived at the Museum of Modern Art in New York City for the premiere of the film “The Dead Don’t Die”. She paired the dress with a black patent leather peep-toe high heels and accessorized with a diamond ring and drop earrings which definitely screamed sexy.

This appearance followed after her breakup with Justin Bieber marked by the erasure of all traces of Justin Bieber off her social media. 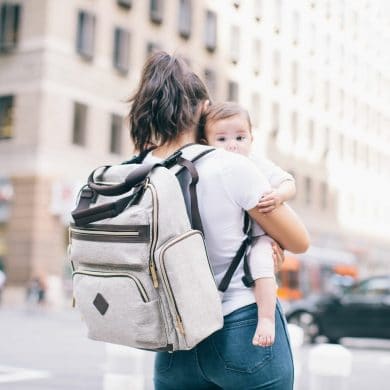 The Best Mom Bags of 2022
We use cookies to ensure that we give you the best experience on our website. If you continue to use this site we will assume that you are happy with it.OkNoPrivacy policy