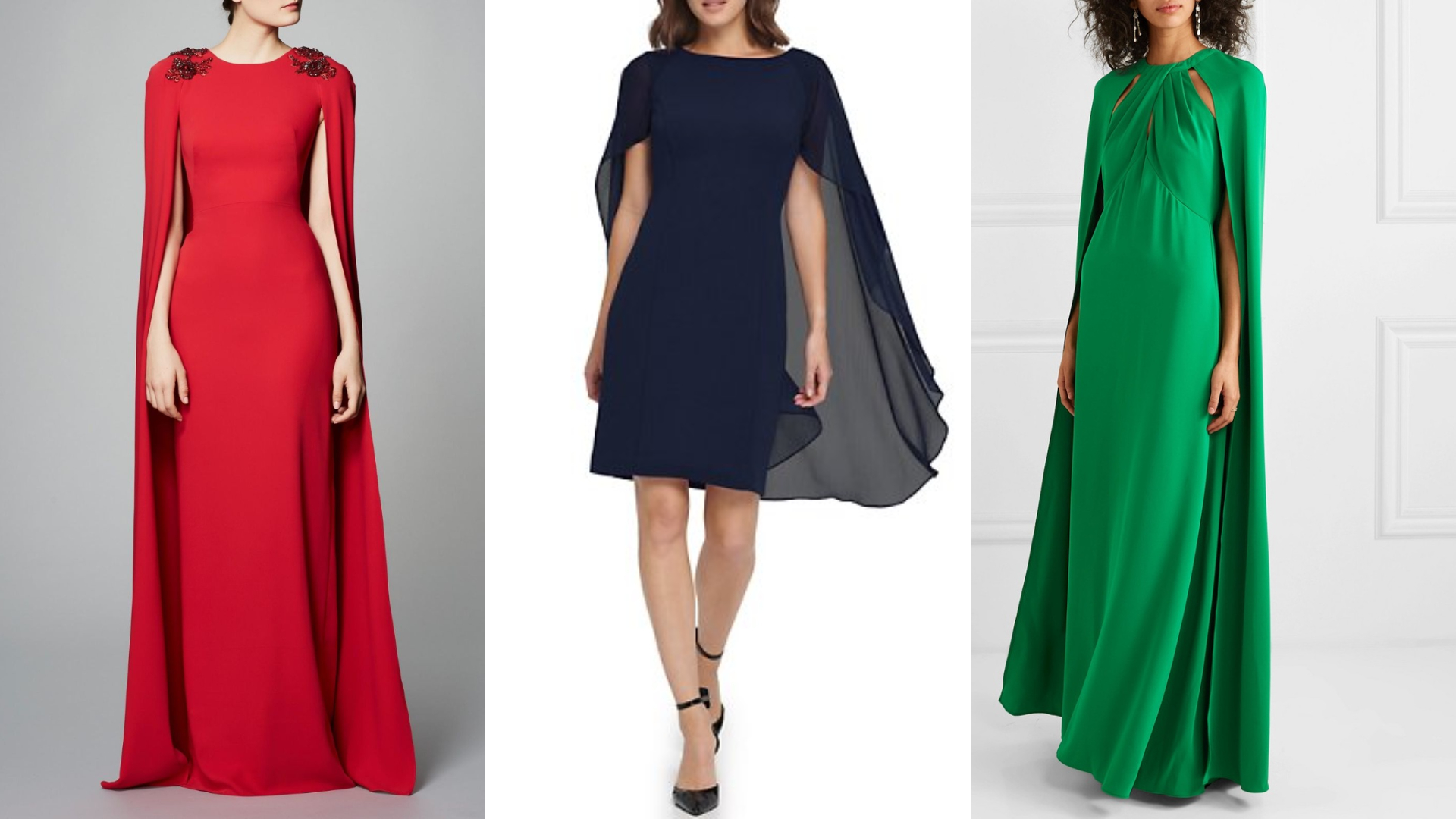 A Quick Guide on Cape Dresses: The Superheroine

Although there are still contentions about what exactly is a cape dress, it is commonly defined (or loosely) as a combination of a cape and a dress which can be worn in three different fashions. The first one is a dress attached with a cape-like garment, the second is a cape integrated into the construction of a dress, and the third and last is a coordinated cape and dress in terms of colour and fabric.

Some argue that some cape dresses “are basically dresses with a separate cloak or cape, which would be cape-and-dress ensembles.” Additionally, it mentioned that “For me, a cape dress describes something closer to the dresses Barbara Cartland (pictured below) or Queen Elizabeth the Queen Mother famously wore, with long flowing cape-like sleeves or shoulder covers that reached to the hem and were very much part of the dress, rather than separate garments.”

Traditionally, cape dresses were worn by the conservative Mennonite women from the nineteenth century until the early twentieth century. Mennonite is a member of the Protestant church which was rooted from the Anabaptists, a radical reform movement of the 16th-century Reformation. The design of the cape dress is very plain as it connotes more value according to their belief and is paired with a piece of fabric usually square or V-shaped which cover the bodice and notably heavily de-emphasizing the female form.

The dress signifies “submission to God, to men in general, and to their husband in particular.” It is also a “statement of unconformity to the world, especially against the rapid and dramatically changing fashion from the end of the nineteenth century onwards.”

Throughout the years, the cape dress has become an important and iconic fashion garment which has been worn in films and even featured in designer collections. In 1926, Greta Garbo wore an Art-deco inspired cape dress with geometrical black and white pattern in the film “The Torrent” where she played Leonora Moreno also known as La Brunna.

Coco Chanel, an iconic French fashion designer known for her luxurious brand Chanel, is also one of the famous designers who created cape dresses. From 1937 to 1938, Coco Chanel made silk and net dress covered with overlapping “fish-scale” black sequins “emphasise the supple, falling lines of the outfit”. The short cape is semicircular in shape and lined with scarlet satin panels.

In the 1950s, cape dresses took on two forms. The first one is described as a full, skirted sleeveless dress with matching elbow length cape while the other one is a beltless sheath dress with a matching cape.

Cristobal Balenciaga in 1967 created an evening ensemble with a matching cape and sleeveless dress made out of black gazar silk. A bit of trivia, gazar was developed by Swiss textile firm Abraham in collaboration with Basque couturier Cristóbal Balenciaga for this specific dress.

The 2000s until today, the cape dress has evolved in design and innovated in variations. It also became one of the staple types of dresses worn on the red carpet by many celebrities.

Cape dresses come in different silhouettes to fit any woman because we are all superheroines of our stories and we all deserve a dress that makes us feel just that. Additionally, not only is this embellishment versatile it’s also very stylish which adds more flare and drama to an otherwise boring one piece of a dress.

As a red carpet staple, cape dresses have been flaunted in different styles by many celebrities and here are some of the noteworthy fashion looks for the books.

One of the most iconic cape dress looks is by Gwyneth Paltrow which dates back to 2012 (Yes, “dates back” because it’s already eight years ago!). She wore a white asymmetrical cape dress by Tom Ford for the 2012 Oscars where she was an award presenter. Cape dresses are already very stylish pieces and it only needs a bit of accessorizing. For this look, Paltrow simply paired it with a sparkly cuff bracelet with her hair on a sleek low ponytail.

The fame of cape dresses in 2013 was duly credited to Queen Maxima. Her cobalt blue cape dress custom-made by Dutch designer Jan Taminiau was a nod to the royal shade of blue of the Dutch flag. Her gown was fitted with a lace feature on the bust with crystal detail which gave the dress a subtle sparkle. It’s paired with a matching blue structured cape and accessorized with the Mellerio sapphire tiara given by her mother-in-law Beatrix.

Actress Lupita Nyong’o wore a red cape dress by Ralph Lauren and served looks for her 2014 Golden Globe nomination for Supporting Actress in a Motion Picture in the film “12 Years a Slave”.

2016 might just be the year for cape dresses as celebrities walked it down the red carpet many times this year.

German-American model Heidi Klum who was the first of German descent who became Victoria’s Secret Angel sported a white cape decorated with elaborate silver-and-gold beaded bird which also featured a short collar and slits for her arms for the 2016 Season Finale of Project Runway. She gloriously paired it with thigh-high chic, gold OTK boots and accessorized with shimmering ear cuffs.

A Quick Guide on Wrap Dress: The Symbol of Women Liberation

There’s also the ever-sexy Jennifer Lopez who wowed everyone with her bright marigold Giambattista Valli number in the 2016 Golden Globes matched with a fingertip-length cape. She also ditched her usual cleavage style with a bit of leg action as she rocked on a more old-Hollywood vibe. She completed the outfit with a two hundred carat diamond necklace which definitely puts “glamorous” alongside her name.

This period is the period of royalty and meaningful cape trends. Here are some looks that definitely grabbed attention.

Meghan Markle is what we probably call in fashion as a “cape crusader”. In 2018 (left) before her wedding with Prince Harry, she wore a sleek navy blue Stella McCartney sheath dress with a cape embellishment. She also made several struts again with a cape dress in a statement all-red ensemble, a Safiyaa cape dress, at the Mountbatten Festival of Music and wore the silhouette in blue at a state dinner in Fiji. This time, she paired it with Simone Rocha earrings made of deep red jewels in the shape of flowers.

This 2020, she marked her final public appearance with a spring green ensemble designed by Emily Wickstead “featuring 3/4-length sleeves, a structured bodice, and an asymmetrical cape design around the neck and left shoulder.” She paired this with “a dark emerald Gabriela Hearst Nina dumpling bag, and light beige, patent-leather Aquazzura pointed-toe heels.” The Duchess of Sussex and her husband, Prince Harry, attended Commonwealth Day 2020 at London’s Westminster Abbey before stepping down as senior royals. 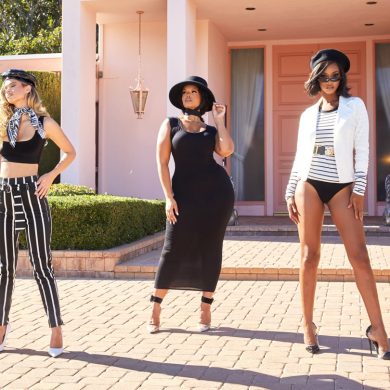 What is Fast Fashion?
We use cookies to ensure that we give you the best experience on our website. If you continue to use this site we will assume that you are happy with it.OkNoPrivacy policy