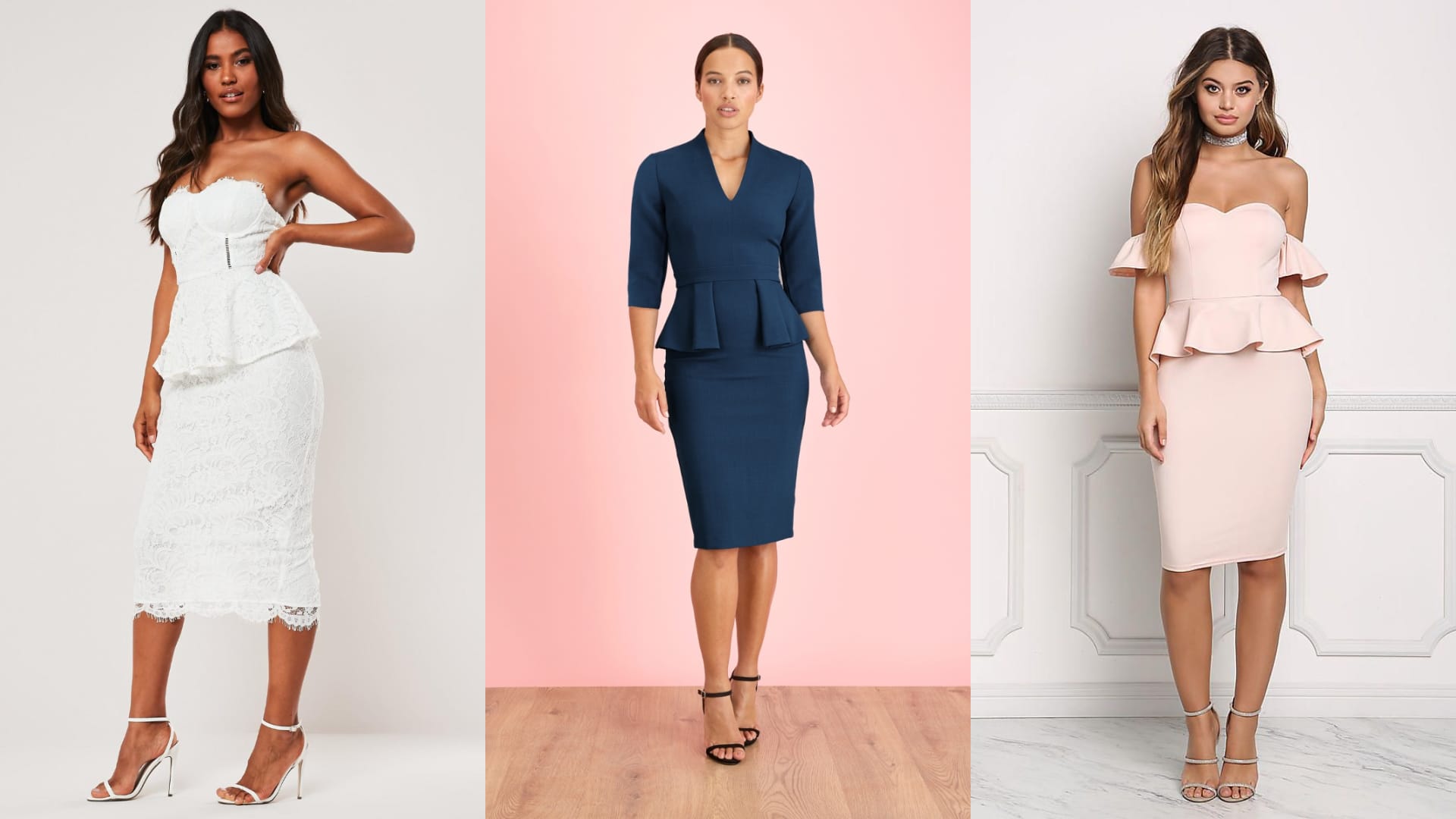 A Quick Guide on Peplum Dresses: The Vintage Charm

In an article by the Wall Street Journal in 2012, it straightforwardly described the horror of the peplum dress. According to Ray Smith, “It sounds like a very bad idea: Design clothes with an extra flap of fabric around the part of a woman’s body about which she is most sensitive.” Thinking about it on an entirely theoretical level, I must say that I heavily agree on that statement. After all, I have not been blessed by the gods of the hourglass figure which fits perfectly for this style.

But according to many designers and even models, this hip accentuating silhouette is nothing to be afraid of even for ladies who do not have the curves. With the right fit, a peplum dress can actually be very flattering to any body shape.

Basically, a peplum is described as a piece of fabric gathered together which flares up and then creates a ruffle or fluted hem. It has garnered immense popularity with its waist flounce giving off a vintage charm especially on modern day dresses.

While loose waists and more relaxed silhouettes are now more common and popular among a wider audience with its capability to support any body shape, nipped-in silhouettes like peplum dresses are timeless pieces that as Taylor Swift said will “never go out of style.”

Peplum dresses go way back to the Classical period (500 B.C.) of Ancient Greece. Grecians wore peplos, a long tube of fabric which is draped and tied at the waist to create a fold of fabric sitting on the top half of the body which is then cinched again creating the peplum shape. Incidentally, this is also the origin word of peplum. Greek women are very fond of this style as it was an “easy way to add a little bit of stylistic flare to their tunics, giving their outfits both shape and volume.”

The Renaissance period from 14th century to 17th century which marked the rediscovery of classical philosophy, literature, and art briefly shifted the design of the peplum dress to a more structured version with a flare outward over the hips instead of draping across the body and are worn by men and women alike.

The peplum went back in fashion during the reign of Queen Victoria (1837-1901) but as women became more mobile, the long skirt became a cumbersome and embarrassing issue which led to a more streamlined style and by 1866, the overskirt was invented as a solution. The overskirt is a shorter piece of fabric which allows mobility without the need to be held up while still concealing the hips and the thighs.

It became more popular by the 1940s with its chic yet modest style. It entered high fashion in the midst of Christian Dior’s “New Look” collection which revolutionized the fashion industry though had received a fair share of backlash with the restrictive nature of its dresses in conflict with the freer wardrobe silhouettes that had been advocated post-war. Nonetheless, the peplum retained its popularity among women and is notably less structured than its predecessors. The peplum cut was often used in dresses, blouses, and jackets paired with a pleating feature to give a feminine touch by creating a volume around the waist and accentuating the hips.

The 1980s marked the resurgence of the peplum after it faded out during the 1950s, the iconic decade of “vintage retro fashion revival including Pin Up and Rockabilly clothing.” During this time, peplum came back in a more exaggerated and risqué form. It became a popular detail in many power suits and also became more voluminous with multiple layers often short and cut in flashy fabrics. There were also other identifiable changes with the style as the 1980s peplum typically began at the hips rather than the waist reminiscent of the 1940s. They were also cut into a “v” shape rather than the popular straight across the seam and even featured uneven hemline or a criss-cross draping detail.

Peplum dresses are made for the hourglass figure – no doubt about that. According to popular fashion designer Vera Wang who featured the style in her Spring 2012 runway show, “A peplum is a play on proportion to make the waist look smaller.” Additionally, Thakoon Panichgul of the label Thakoon also said, “It’s flattering, because you see the waist and how small that is when the peplum goes out.”

Celebrity stylist Robert Verdi also shared some peplum sentiments. According to him, “A peplum exaggerates how short your waist is. You don’t have a lot of length between the bottom of your bust line and your hip.” He also pointed out a tip for the curvy women to avoid the horrors of an unflattering peplum. “Avoid anything that’s ruffly or ruched or short or extremely long,” he says. “You don’t want it to stick out too far from the body and you don’t want to add extra fabric.”

Catherine Moellering, executive vice president of trend-forecasting firm Tobe in 2012 posed a question: “How will it look on hips that aren’t runway-model slim? This fear may prevent peplum from catching on with a large number of women for a while.”

But nowadays, peplum are designed with every body shape in mind. Quick tips on peplum choices are according to Noodz Boutique: “If you have a straight body type, the gathered peplum will suit you fine while if you have a heavier lower half, the flared peplum would make you look elegant. The pleated peplum can help you hide your fat rolls while the asymmetrical peplum helps you gain the impression of being curvy and voluptuous.”

The peplum made a huge comeback on the 2012 runways with updated twists from the nostalgic cinched and ruffled waists thanks to high-end fashion designers like Giorgio Armani, Celine, and Jason Wu and mainstream retailers like J. Crew and H&M. This resurgence was largely attributed to the colorful and voluminous spring collection of Jil Sanders in 2011 wherein she slowly re-introduced peplum back into women’s wardrobes.

The trend quickly picked up and here we see Emma Stone wearing the rage with a navy Burberry peplum top with an emerald green sequin skirt which she finished off with black pointed pumps during the 2012 CFDA Vogue Fashion Fund Awards in New York City.

Another Emma also wore this trend in a dressy peplum top with feathery embellishments by Jason Wu paired with a black pencil skirt, strappy heels, and a leopard print clutch.

Actress Blake Lively also sported this look with a black and white look in a Jason Wu for Target dress. Both the skirt and the peplum detail featured gem embellishments which added an interesting texture to the outfit. Blake accessorized it with drop earrings, a statement cocktail ring, and rounded pumps.

Although the dress went back in trend, it was considered quite dead after that until in 2018 when the Duchess of Sussex, Meghan Markle revived the peplum when she stepped out for the Coach Core Awards at Loughborough University with husband Prince Harry. Meghan was seen wearing an Oscar de la Renta peplum top while rocking her then new sleek layered hairstyle and sky-high stilettos. 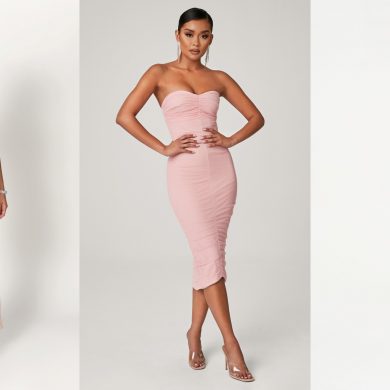 A Quick Guide on Strapless Dresses: Collarbone Exposed!
We use cookies to ensure that we give you the best experience on our website. If you continue to use this site we will assume that you are happy with it.OkNoPrivacy policy