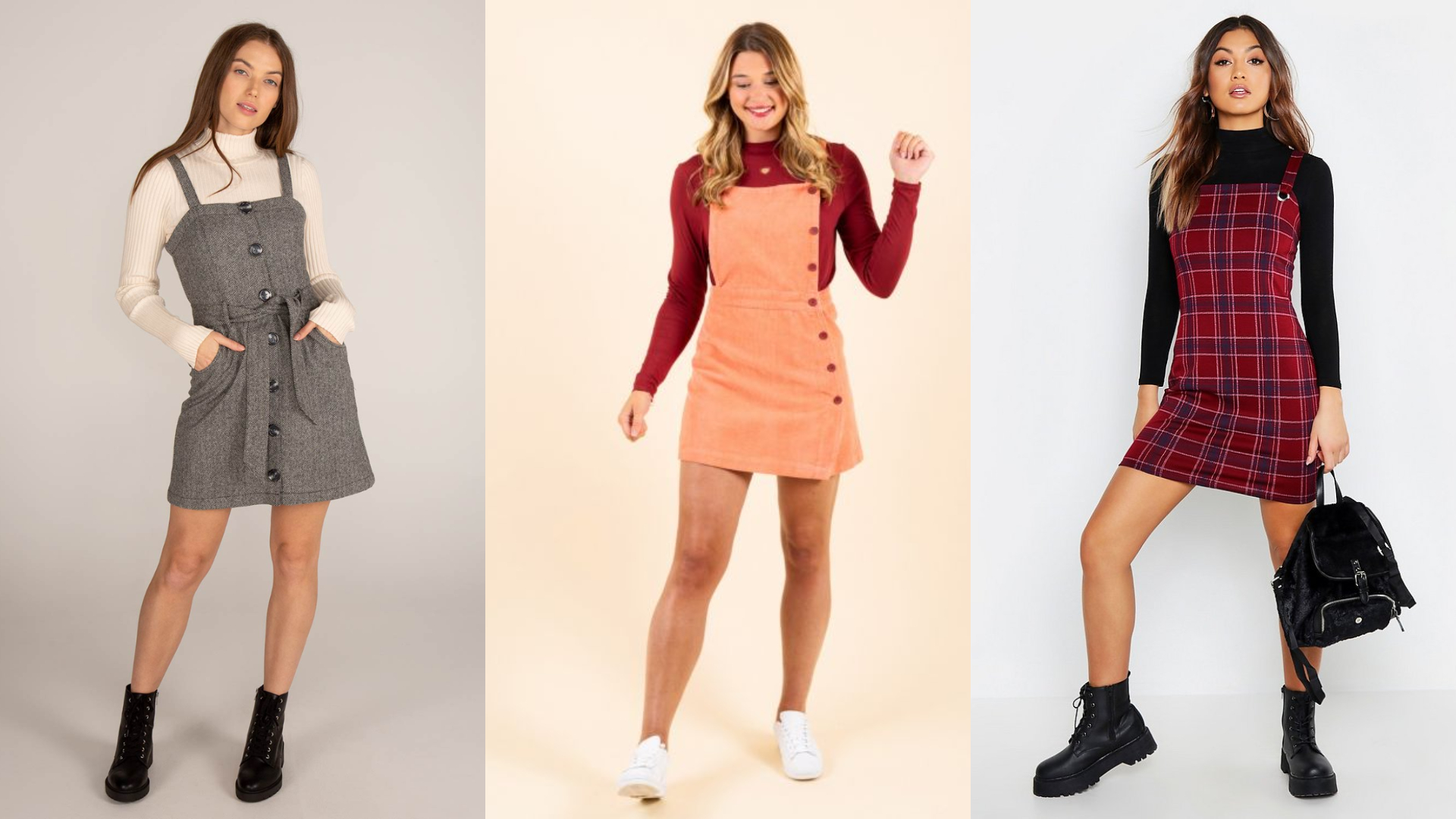 A Quick Guide on Pinafore Dresses: The modern Alice in Wonderland

Pinafore is not as common compared to other types of dresses like the A-line or sheath and is basically more popular as a “jumper” in American English but the main difference is that a pinafore has an open back unlike a typical jumper.

Basically, it’s a sleeveless garment which is worn as a decorative garment most closely associated with an “apron”. It is described as a “full apron with two holes for the arms that is tied or buttoned at the back, usually just below the neck.” The earliest version of a pinafore is a functional garment which serves to protect the wearer and at the same time is easily removed by pinning it to the wearer’s dress. Pinafore is actually a contraction of two words: pin and afore which simply means ‘pinned at the front’.

Aside from being a functional garment, a pinafore also functioned as a young girl’s uniform dating back in the eighteenth century. During this time, the writings of a Genevan philosopher, writer, and composer named Jean-Jacques Rousseau had revolutionarily changed the view on children. According to him, children were distinct from adults and in dressing children he suggested that “plain, comfortable clothing which allowed freedom of movement was best.” This idea became firmly entrenched in the nineteenth century that it proliferated the pinafore fashion amongst girls, young women, and even small boys!

Garments and images during this era point to an image of pinafores as plain white fabrics generally worn over dark dresses. This might be because white fabrics are relatively easy to wash when dirtied using bleach and starch. The pinafore evokes “free childhood” — that is, playing which may sometimes involve dirt and other messy substances.

The early twentieth century marked the evolution of a pinafore from a functional garment and a plain overdress to a dress. Moreover, from washable pinafores over unwashable dresses in the previous century, the pinafore dress became washable in whole. It was also during this time that the popular textile trend became incorporated into pinafores which often featured animal, toy, and fairy tale character prints.

Despite the advent of the textile patterns and prints, pinafores (at the core) remained a “fundamentally practical garment” with one solid color and functioned as cover up or worn over blouses to one-piece sports frock or playsuit. Pinafores became very popular in fashion as part of the little girl look in the 1960s. At the same time, A-line dresses also became very popular which were considered as an “updated pinafore”.

One of the most iconic and classic pinafores was featured in the 1865 novel by English author Lewis Carroll entitled “Alice’s Adventures in Wonderland”. The novel was turned into a film once in 1951 and then another in 2010 starring Mia Wasikowska as Alice Kingsleigh although the pinafore was ditched for this movie.

Another iconic pinafore was worn by the character Dorothy Gale created by American author L. Frank Baum. Dorothy first appeared in the classic 1900 children’s novel “The Wonderful Wizard of Oz” and also became the protagonist of its many sequels. While Alice is wearing a classic white pinafore over a blue dress, Dorothy is wearing a blue pinafore over a white blouse.

How do you style a contemporary pinafore?

In fashion and styling, pinafore dresses give you a break from the more formal types of dresses without looking too casual or underdressed for a stroll in the city or hangout with friends. It’s also a very comfortable piece that you can style easily depending on your mood and preferences.

Here are some classic pinafore looks that you might want to try.

Here is a classic take on pinafores which is usually just layering it under with a shirt and pairing it up with sneakers. This is a very casual and sporty look which looks good when you’re on a grocery errand or just meeting up with friends over a picnic date. You can go with contrasting colors just like this one in yellow and black but you can also try a more muted tone. If you want to dress it up a bit, you can swap the shirt with a blouse and the sneakers with kitten heels.

You can also bring the pinafore look up a notch by wearing it with a long sleeve blouse and thigh-high boots. This look is very preppy and stylish which will surely make people turn twice. You can also try a long-sleeved turtle neck if the weather is a bit chilly. This outfit also looks nice with a coat or jacket and a hat.

You can also try this style which features a more comfortable design of pinafore layered under with a ¾ long sleeve and ankle-high boots.

But you can also totally ditch the layerings and just wear the pinafore dress as it is. Personally, this style looks best with a denim type pinafore or corduroy which adds texture to the outfit without the need of any layers. This outfit is on point with its open-toe thigh-high boots.

Nowadays, contemporary brands have also explored pinafore jumpsuit styles like this one paired with high heels and long sleeves which you can definitely wear for your meetings or on a normal day in the office. It definitely screams stylish and shying away from the common cutesy look or take on pinafores.

Perhaps the most iconic pinafore dress was the one worn by 16 year old Judy Garland when she starred as Dorothy Gale in the 1939 film “The Wizard of Oz”, the Hollywood adaptation of the 1900 book written by L. Frank Baum.

In an article by CNN Style, they described the dress and the whole outfit in full detail. “It was a blue and white dress with a fitted bodice and straps fixed at the front and back by two mother-of-pearl buttons. The pinafore was worn over a high-necked cream blouse with puffed sleeves, and sometimes incongruously paired with sparkly red shoes.”

This rather mundane dress (which was thought as a deliberate move by Metro-Goldwyn-Mayer or MGM to create contrast in the film) went into auction in 2015 with three bidders who pushed the price range beyond the projected $800,000 and $1.2 million. During the event, Catherine Williamson, Bonhams’ Director of Entertainment Memorabilia, said, “As we witnessed today… the dress is considered a true and timeless icon of classic Hollywood.” The dress was sold at $1.56 million.

“The Wizard of Oz” was Adrian’s most famous film and while the pinafore was an iconic garment, his most famous work was Dorothy’s ruby slippers gifted to her by Glinda the Good Witch. The original description in the book was silver but the filmmakers wanted a bit more drama thus Adrian set out to dye a pair of pumps red and covered them in sequins which is now on display in the National Museum of American History.

Though his best work was considered Dorothy’s pinafore dress and ruby slippers, he is best known in the fashion industry for introducing shoulder pads in women’s garments in the 1940s which came back in trend in the 1980s. Recently, the style reappeared in the 2018 Fall Winter collections by Tom Ford, Saint Laurent, and Fareth Pugh. 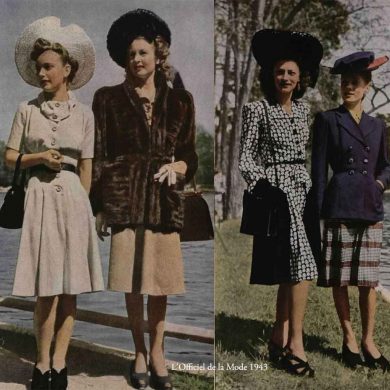