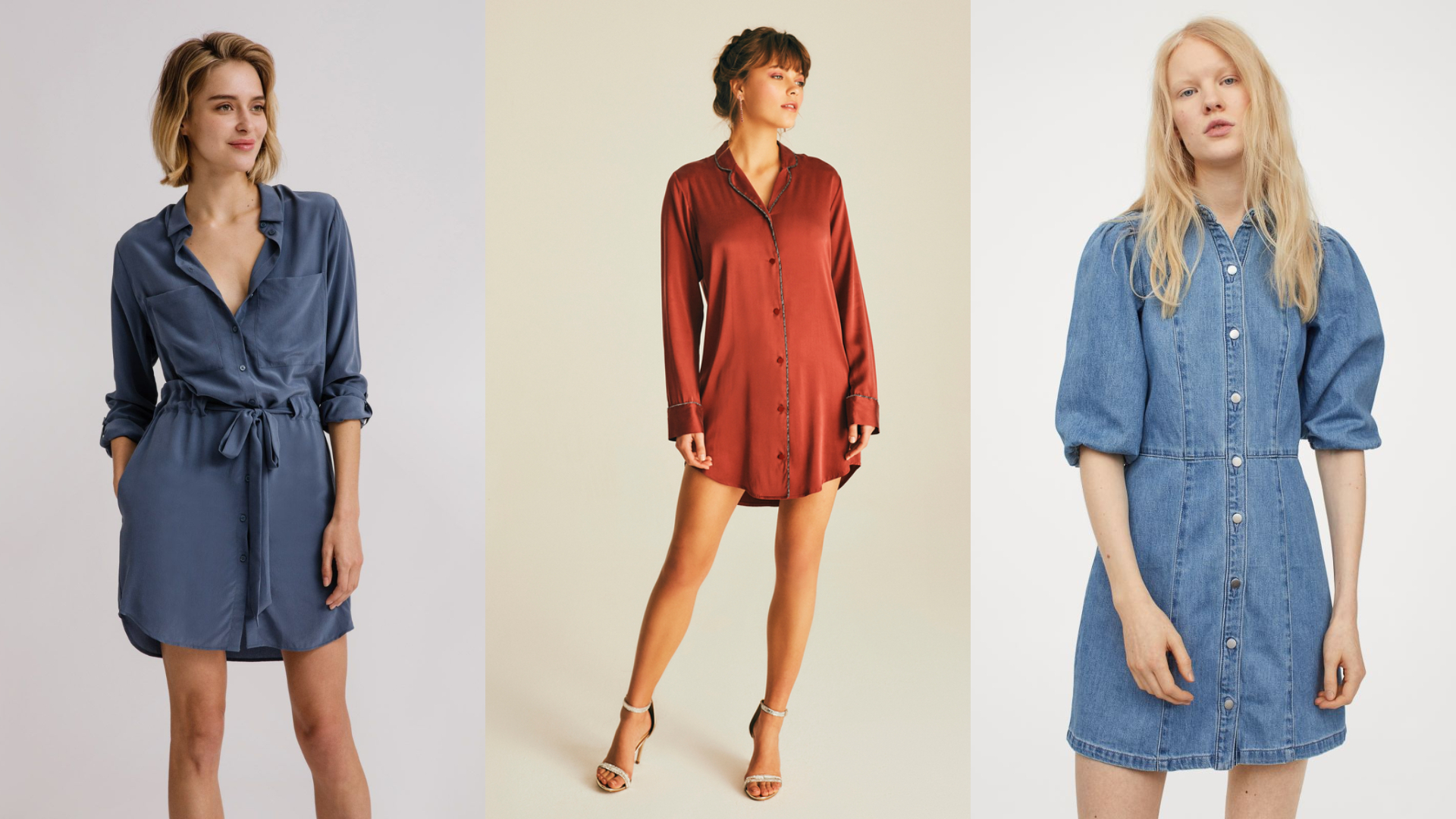 A shirtdress is women’s wear borrowed from the style of a man’s shirt. I am sure that at one point in time you have borrowed your boyfriend’s hoodie or his shirt because first, it’s oversized and second, it’s comfortable. Also, let’s just admit it that men’s clothes are way more functional with all the right pockets while we can’t even have one to stash in some gummy worms or even just our phones.

Borrowing from the man shirt design, a shirt dress embodies utility, versatility, and comfort. It is characterized by a collar, a button front, or cuffed sleeves usually made from crisp materials like cotton or silk. They are typically cut without a seam at the waist which creates a looser fit and longer than the traditional men’s shirt from which it came from.

The history of the shirt dress started before the 1940s wherein it was popular style but it was then called “shirtwaist dresses”. The style then was characterized by a full skirt with a stiff petticoat underneath, along with a notched collar and elbow-length sleeves.

By 1947, Christian Dior, a French fashion designer, best known as the founder of one of the world’s top fashion houses, also called Christian Dior, introduced his postwar collection titled “New Look” which debuted a closer version of the shirt dress we know today.

This collection was dubbed as revolutionary and helped establish Paris as a fashion capital. But in the postwar world, this collection also received its share of criticisms due to its restrictive nature. During this time, women’s fashion was already screaming “out with the corsets” and on this note of a freer wardrobe choices, the collection faced ridicule.

It was only in the 1960s that the shirt dress was created in a more relaxed silhouette made with comfort in mind for the wearer. It had a looser fit and softer materials such as cotton also started to become more prevalent.

Today, the shirt dress remains to be a stylish piece that most women own as a wardrobe staple. Designers such as Stella McCartney, daughter of English singer-songwriter Paul McCartney and his late wife, American photographer, musician, and animal rights activist Linda, still showcase shirt dresses in her collection and have evidently evolved to longer lengths compared to its early years in fashion.

Shirt dresses owing from its loose and relaxed silhouette is a dress for all body shapes. The challenge with shirt dresses is that since it has no defined waist and is basically very simple, you would need to be stylish in order to accentuate your assets. (Although we’re also seeing stylish pieces of shirt dresses which don’t really need any additional bling to make the outfit look fabulous!)

Here are different shirt dresses and styles you might want to try.

First off is dressing up in a classic style and that is a shirt dress in its most original form – in white and casual. But this look definitely levels up the style a notch by rolling the sleeves to a business ¾ sleeve and pairing it with a black bag and black stilettos. The watch and the sunglasses also add to the professional work vibe. This is perfect for your stylish 9-5 work because we believe that in this house that we need to look good everyday for ourselves. Also, aren’t we feeling a bit more productive when we feel good about ourselves?

Or you might want to take the style level up a notch from the classic shirt dress look by throwing in some boho elements to add texture to the outfit. This style is perfect for the Fall season and you can also swap the shoes with a pair of ankle boots or even thigh-high!

Next on the list is quite different from the usual take and what can I say, I am totally digging this look by Camille Callen. She’s wearing a coral maxi shirt dress with an oversized scarf by Asos and then layered with a black jacket by Zara and completing the look is the Adidas Superstars!

You can also switch it up with a trench coat-inspired shirt dress look. Helena Bordon is wearing a beige shirt dress from Barbara Casasola, a London-based Brazilian fashion designer, with a belt to accentuate her slim figure and finished off with Chelsea boots. She also accessorized with a bag from Louis Vuitton to create the perfect aesthetic.

Last on our list, you can switch the shirt dress down to a very casual fashion by wearing it over a pair of white shirt, denim shorts, and sandals. You can also try wearing it with leggings and sneakers or pick a denim shirt dress for a simple day out for errands and hanging out with friends over lunch.

Last 2019, Taylor opened the American Music Awards in Los Angeles, California as the Artist of the Decade with a performance of “The Man”.

As she once said,

“I’d be a fearless leader

I’d be an alpha type

When everyone believes you

What’s that like?I’m so sick of running as fast as I can

A Quick Guide on Babydoll Dress: The Lolita Weirdness

And I’m so sick of them coming at me again

This is one track off her “Lover” album which talks about double standards and sexism against women. She wore a shirt dress with the names of her previous six albums: “Taylor Swift,” “Fearless,” “Speak Now,” “Red,” “1989,” and “Reputation” in prison fonts “as a metaphor for her ongoing feud with Big Machine Records, her former label that owns the master recordings of nearly her entire catalog.” according to Insider.

Though this isn’t exactly a designer shirt dress, it’s Taylor Swift wearing it so it’s already as good as a designer item. During her performance, she was also joined by little girls wearing the same ensemble.

Another equal stunner on a shirt dress is the Duchess of Sussex, Meghan Markle. She wore this stunning blue button-down maxi shirt dress by Veronica Beard, a contemporary fashion house, on the third day of their 10-day royal tour of South Africa. She slipped this on as she and Prince Harry visited the Six Museum in Cape Town and paired it with a belt tied around her waist to cinch it and black Castañer Carina espadrille wedges. Meghan also wore this dress on different occasions. One was on a royal tour of Tonga, Australia, New Zealand, and Fiji. She also wore this when she was pregnant with her child, Archie, in October 2018.

Like Taylor Swift, Anne doesn’t really need a luxury or designer brand to seal her fashionista style. Five years ago, Anne wore this trendy asymmetrical white shirt dress with three-quarter length sleeves and slits along the sides. She matched it with a pair of black peep toe pumps with cutouts along the sides and metallic heels. To elevate the look, she also accessorized with stackable gold rings and coordinated with dangling earrings and a large black leather bag.

Best 50s Women’s Fashion
We use cookies to ensure that we give you the best experience on our website. If you continue to use this site we will assume that you are happy with it.OkNoPrivacy policy