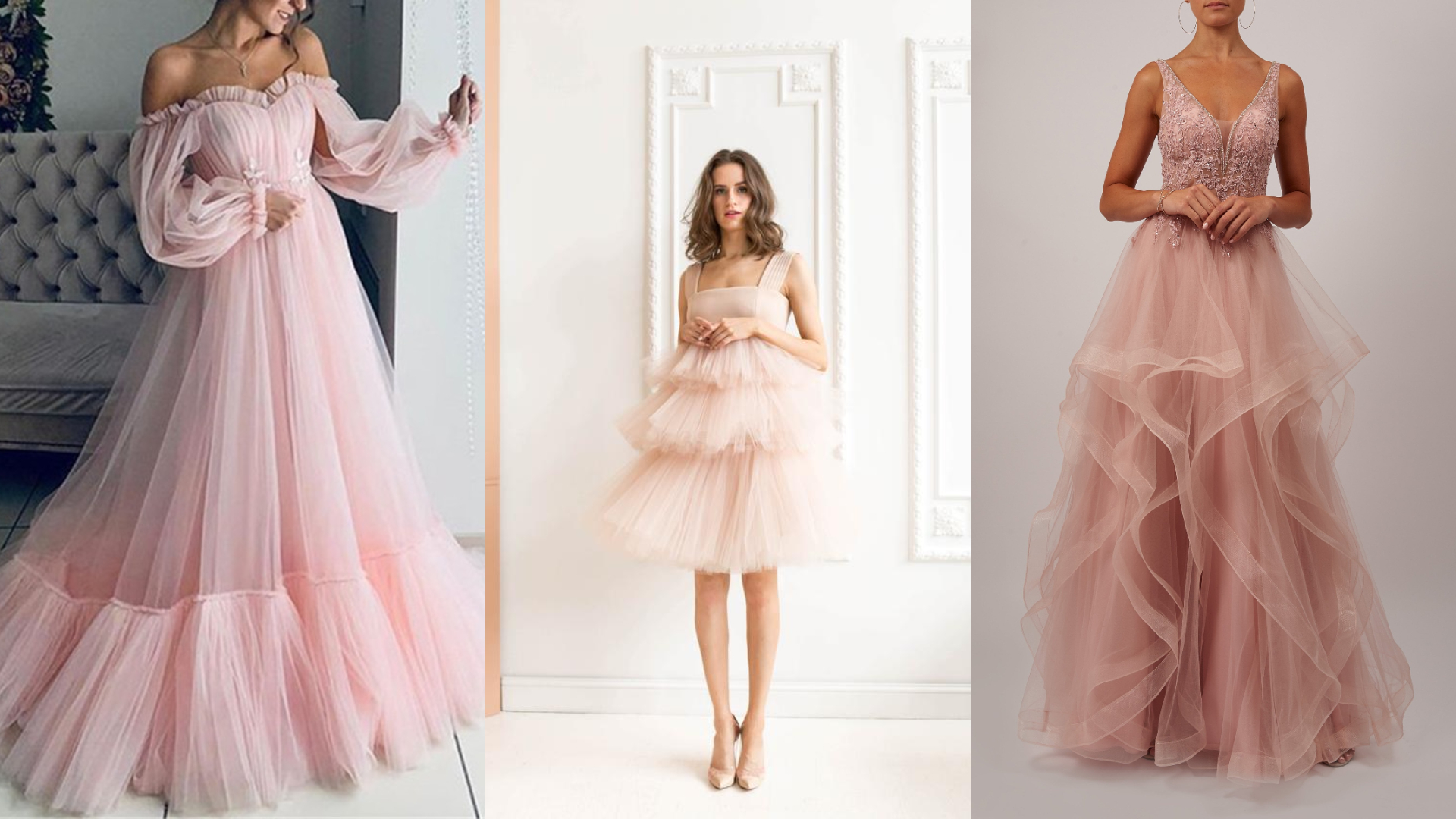 If by any chance you’ve been through a phase called “my mom wanted me to do ballet” because that is what most young girls engage in when you’re five or six years old, then you must have definitely worn a ballet tutu. That means you also know what a tulle fabric is.

Unlike other types of dresses like sheath or A-line which are basically defined by the shape or its visual appearance, a tulle dress is not necessarily a dress if we are dealing with technicalities. Rather, tulle is considered a fabric and to an extent can be called an assisting garment. It is commonly defined as a “netting” fabric made out of polyester (as the most common fibre), nylon, silk, or rayon (least common fibre). It is very lightweight, very fine, sheer material with a general crisp feel. Tulle is used to create an image of  strong yet delicate femininity with its smooth, soft, billowy, and (quite) structured look.

The material from which it is made can affect its look, feel, drape, and durability. It also has a variety of finishes from matte to shiny and glittery and even metallic. Aside from those, tulle can also be easily dyed into different colors making it a very versatile piece of clothing.

Its history is as colorful as it can be with different stories telling of how tulle first originated.

The most common story is that during the 18th century, Tulle which is a city located in the southern central region of France, became well-known as the center of lace and silk production. With this idea, early tulle netting has been thought to originate from this French city.

The second story is that this “purity evoking garment” came from the mythical divine spheres of the stories of Greek gods and goddesses (which you may have probably read in the adventures of Percy Jackson by Rick Riordan) dressed in sheer cloaks and heavenly-looking garments.

A common story among all stories is that in 1840, Queen Victoria of the United Kingdom of Great Britain and Ireland wore a “candid, filmy tulle wedding gown” when she wed Albert of Saxe-Coburg and Gotha after her ascension to throne in 1837. Since then, tulle had become widely and commonly associated with wedding gowns or dresses.

Aside from the gowns, tulle is also used for bridal veils, skirts to make it puffy or airy without the additional weight, accent, illusion panel on wedding dress, and traditionally used a undergarments like underskirt and petticoat which creates a stiff and large ball gown shape.

In the late 19th century, English F. Worth, a designer of high parisian society, launched the veil hat.

In this era, tulle became a subversive power and became a “catwalk staple” in the #MeToo movement, a social movement against sexual violence and assault which actively advocates and encourages women to speak out about their experience. The phrase was first used in 2006 by Tarana to raise awareness and had found global recognition eleven years later through a viral tweet by Alyssa Milano who spoke about her story revolving around producer Harvey Weinstein which blew up on different social media platforms as well.

According to Sara Idacavage in an article published in Fashionista, “Often associated with bridal wear and ballerina costumes, the ethereal and transparent qualities of this lightweight, fine netting have come to serve as a symbol of the contradictions associated with womanhood: delicate yet strong, pure but sexy.”

With that, this quite “romanticized” fabric has graced the 2018 couture runways of Saint Laurent, Moschino, Alexander McQueen, Oscar de la Renta, Simone Rocha, Preen, and Delpozo, just to name a few.

Many sources have different types of tulle but it can be narrowed to three general types. The first is crafting tulle made from inexpensive nylon tulle characterized by its stiffness which holds its shape well. The only drawback for this type of tulle is that it’s less durable. It’s commonly used for wreaths, gift wrap bows, children’s tutus (the one costume you want to wear but doesn’t really fit you anymore), and party decorations.

Second is the dressmaking or bridal tulle made from a variety of fibres like silk, nylon, rayon, or cotton mainly used for women’s fashion wardrobe from formal wear to bridal gowns and those professional ballet tutus (which we could have worn had we decided to push through ballet lessons).

Silk tulle has the softest drape while nylon tulle are stiffer and are used for pancake-shaped classical ballet tutus. Nylon or polyester tulle that is very sheer and has a medium level of stiffness and drape are called bridal illusions.

Tulle dresses generally flow smoothly and keep the body in shape. While it suits most dress silhouettes (which dictates whether it would be flattering on you or not), it is usually done in ball gowns, A-line, mermaid, and trumpet silhouettes which are considered very feminine and form-fitting silhouettes. Typically, tulle is used as an overlay for these types of dresses.

It’s best to know what body shape you have to make a more in-style choice for your next outfits (this also works with skirts and pants!).

A-line dresses work with curvy figures such as hourglass or pear-shaped figures. Hourglass also works well with mermaid-cuts (or any silhouette for that matter) and this cut also suits muscular body shapes. Ideally, mermaid cuts are for those who want a fitted dress all over the body but also with some volume on the skirt area. Trumpet silhouettes are also good for slender frames.

Last 2018, Priyanka Chopra wed singer Nick Jonas in a series of weddings and reception where she also wore different designer dresses from her custom-made Ralph Lauren for her US wedding to the intricately-designed and crafted Sabyasachi ball gown for her Indian wedding which also featured French embroidery and Western veil to which Priyanka said is an “amalgamation of who I am.”

But aside from these gorgeous gowns, there is still one couture gown that deserves the “wow”. Mimi Cutrell, Priyanka’s longtime stylist, posted the photos above which features Priyanka in a custom Red Dior gown in a fitted bodice design with a sweetheart neckline and of course, a billowing tulle skirt. This was glamorously paired with 16 carats of Chopard jewels, including an oval-shaped diamond drop on her head.

The reception followed their exchange of vows in a traditional Hindi ceremony at the Umaid Bhawan Palace in Jodhpur, Rajasthan last Dec. 2.

Here are some more celebrities who definitely owned the tulle style in 2011. They turned the princess puffs and ballet tutus into a more chic style.

First on the list is Carrie Underwood, winner of American Idol Season 4 in 2005, who graced the red carpet of the American Country Awards in a nude, strapless Maria Lucia Hohan cocktail dress. The event took place in Las Vegas where Carrie bagged the first big award “Single of the Year: Female” for “Mama’s Song”.

Next is Brooklyn Decker in the 2011 Video Games Award where she wore a tulle-trimmed Nha Khanh, a luxury womenswear clothing line based in Dallas, Texas co-founded by Khanh Nguyen. Decker paired it with hot pink lipstick and statement bold yellow Jimmy Choo pumps.

Last but not the least is former Glee cast member, Lea Michele hit the premiere of the 2011 film New Year’s Eve which she starred alongside Zac Efron, Michelle Pfeiffer, and Ashton Kutcher. Michele rocked her champagne-colored Valentino gown designed in tulle with a very sexy neckline as well.

Of course, you can DIY your own tulle dress. Take a look at THISISKACHI’s video on how to make a dress that will make you look like a fairy princess! 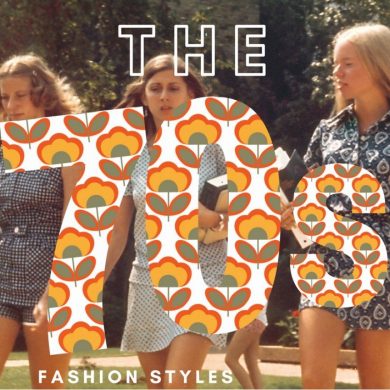 Best 70s Women’s Fashion
We use cookies to ensure that we give you the best experience on our website. If you continue to use this site we will assume that you are happy with it.OkNoPrivacy policy