Fashion in the 1920s was all about getting loose which applied to morals, too.

In the year 1920, women wore dresses all day and every day whether it’s rain or shine. Most of the dresses had a drop waist and paired with a belt or sash around the hip and a skirt that hung down anywhere from the ankle but would never be above the knee.

The most fascinating thing that you will notice about the 1920s fashion is the shape of the silhouette. It is strikingly straight and flat. While most of the fashions accentuate the figure in some way or another, it almost seemed like, at times, any shape other than straight was a big no-no. The straight shape is a very variant element of 1920s style.

The 1920s Hats and Headwear

What are the types of hats did women wear in the 1920s?

In the 20s, headwear was always a vital part of the fashionable woman’s outfit. There are several styles that can be seen, some were styled almost like bonnets, while the others were very close fitting and it was called Felt Helmets. Many hats were adorned with silk roses, ribbons, buckles, pins, feathers and more.

Some had a ribbon loop on the side, others were velvet with gold lace trim. The style variations were endless.

A very chic and youthful looking hat could be close-fitting with a fashionable pieced crown pulled softly to the back. The narrow off-the-face brim was finished with rows of stitching. The smart ostrich fancy on the side was made of two shades and finished with grosgrain ribbon.

The other styles might feature a high crown fashioned of velvet matched with an off-the-face flange that was outlined with dainty plush flowers. The band and flange facing was made of silk satin.

Larger hats were better at making the wearer the center of attention. The crown was effectively trimmed with tubular stitching and the semi-poke brim faced with taffeta. It was a hat so spectacular it had to be seen to be truly appreciated.

The designer had used the velvet flower and grosgrain ribbon as well as band and bow ends. Hats like these were featured quite prominently in exclusive New York fashion shops, costing twice as much as most other hats.

The 1920s Coat and Outerwear

What are the types of coats did women wear in the 1920s?

Coats were usually made of somewhat subdued colors, browns and dark blues, and were often covered with large buttons. Furs and fur trimming was wildly popular. Just about any animal imaginable was available to line the inside of a coat or to serve as a warm collar.

In the early 1920s, bows weren’t necessarily prominent features on women’s coats, but by the mid twenties, Paris had cabled the world to let them know: bows are in. Depending on the budget, a woman would generally choose between wool velour and fur. A particularly nice coat might be made of all-wool Venise Bolivia, with a Paris bow and buckle that fastened in front of the left hip.

While many coats were long, stretching below the knee, a shorter coat was also in fashion. Short sport jacquettes were quite popular for their convenience and functionality. Coney fur in a natural tan shade, or dyed in silverine shade was a popular choice for this coat.

Another popular shade was called Muskratine, which was dyed in a tan shade with brown markings to closely resemble the natural muskrat.

What type of shoes did women wear in the 1920s?

Women’s shoes became more delicate and pretty over the roaring 20s decade, simply because they were more visible under short dresses. For daytime use, the low heel lace-up Oxford shoe in brown, white or black was worn every day. For something a little nicer when going out or dressing up, it was the classic Mary Jane heel with a single strap across the front.

The late 1920s T-strap heel is the most famous evening shoe because the two straps held onto the foot while dancing the Charleston. They often came in black and gold or silver with hand-painted heel designs that stood out on the dance floor.  Straps and buckles were also decorated on fancier models.

There were basic slip-on pumps, low heel pumps with toe buckles inspired by colonial-era shoes, and multi-strap heels in the early ’20s as well.

What type of sportswears did women wear in the 1920s?

A particular sport always called for different types of clothing,however in the 1920s, there were two primary sets. The first set was worn by golfers, tennis players and other ladylike sports. It consisted of a long sleeve blouse, a long or tea-length skirt, and a loose-knit vest or sweater. A thin belt tied the waist in.

The second look was for more vigorous outdoor activities, such as hiking, riding, camping, and fishing. Instead of a skirt, women wore wool knickers. They were wide and baggy around the hips with a button cuff below the knee.

Women also wore thick stockings or knee-high argyle socks with a pair of flat Oxfords. A button-down shirt with collar and a skinny black tie gave a nod to menswear. Knit vests, pullover sweaters, and long cardigans added warmth. Many men did not appreciate this masculine look, but young adventurous women loved it.

What type of beach attire did women wear in the 1920s?

Weekends and vacations were a new trend in the 1920s. Beachside destinations were the most popular, and one where casual comfort was of the utmost importance. White or navy dresses with a nautical or sailor theme were what all classes would wear.

Upper classes in the late 1920s began wearing a pants ensemble called beach pajamas. They were inspired by Asian prints with wide legs and a kimono-style top or jacket, they were one of the few times women could wear pants. Read about this and other types of women’s 1920s pants here.

Some women wore beach pajamas while lounging at home or playing a game of mahjongg. Miss Fisher wears quite a few flowing wide-leg pant and kimono coat ensembles while solving murder mysteries.

What are the types of dresses women wore in the 1920s?

Dresses came in all kinds of colors and shapes, but a very common dress seen in the late 1920s was a thin, loose silk dress with a thin belt around the waist and paired with similar colored, delicate embroidery on the chest.

The hemline wandered up and down, some women loved showing legs, others didn’t. Fortunately in the 1920s, designers catered to all different tastes.

The youthful looking frock of all silk flat crepe was made of contrasting color, hand embroidered Georgette crepe to match the narrow cuffs which are also trimmed. A square neckline was particularly chic with a jeweled pin and bow of self material. It also included a shirring across the front.

Another modern style was the two-piece effect. These sport dresses could be worn as a suit when weather permitted.

Trends and styles that were once considered modern and daring will become old and ugly as time passes by, only to be reborn and re-worn decades later. And remember, that cycle seems to be turning quicker than ever. 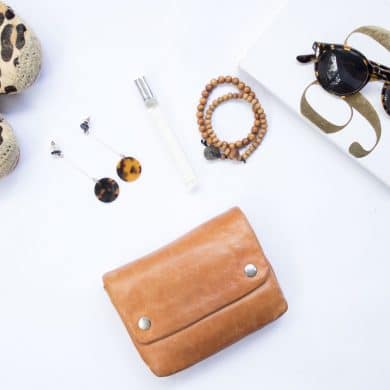