Fashion means unpredictable trends. And the 1950s were all about fashion icons that stirred the industry. After the war, fashion was no longer hidden in homes and closets but brought out to the streets, paving the way for the 1950s fashion icons.

The 1950s Fashion Icons: Fashion Trend of the Decade

Fashion is unlimited. And that started when everything got better postwar. These are 1950s legendary fashion icons whose legacy and fame still pulled through decades later.

Platinum blonde hair, red lips, and skin-revealing outfit like no other. Marlyn Monroe was not only famous for her glamorous closet but also for her charm, sex appeal, and how she rocked her killer curves. Nobody will ever forget her iconic pink tube gown and white pleated halter dress. Outside of her films, she dons more neutral-colored dresses, highlighting her beauty even more.

Definitely one of the most famous 1950s fashion icons.

Audrey Hepburn is the face of elegance back in the 1950s. The trendsetter of the little black dress showed us that less is more. Her beehive hairdo was iconic and is still a popular formal style during the 2020s, and so were her exceptional accessory choices. This queen of simplicity was Givenchy’s muse for years, and we have no questions about why.

James Dean is, undeniably, one of the most handsome men of the 1950s. His fashion is effortless, with basic outfits and almost no jewelry, and he was famous for rocking a dreamy leather jacket and jeans combination. He is rarely seen wearing formal outfits, but he keeps it simple while keeping a cool image when he does. His trademark quiff hair made him look more charismatic, definitely fitting to be one of 1950s fashion icons.

Grace Kelly is probably one of the most photographed women of the 20th century. She is the definition of classy and elegant, with a wardrobe filled with timeless clothes and accessories. She wears cotton shirts, synched-waist dresses, and beautifully cut coats commonly seen in modern women. Her wedding dress is the cherry on top of her fashion run. It was made with intricate lace and inspired Kate Middleton’s gown in 2011. The Kelly bag from Hermes is named after her.

A bikini is a showstopper in an era where the skin is just starting to be revealed. And Brigitte Bardot is a new sight. She was the person that popularized bikinis and had everyone’s head on her as she worked a floral bandeau. After that, the bikini became a must-have fashion item for girls worldwide.

Balenciaga has been around for the longest time and greatly influenced 1950s fashion. He gave us the balloon jacket, tunic dress, and baby dolls that played a massive role in femininity. His designs were popular decades ago to now,  and his name and company “Balenciaga” became a household name for luxurious items.

Elvis Presley was everywhere during the 1950s. He’s the epitome of preppy rock, biker fashion, and men in high-waisted trousers. When he released his first album in 1956, his wardrobe was everyone’s dream, which further cemented his mark on pop culture.

Chanel had an established name even before the war during the 1920s and the 1930s. But she and her brand grew more prominent in the 1950s. She introduced the “the Chanel suit”, a slim tweed with bound edges. It’s a more elegant and looser option for the synched waist style. To date, Chanel is still a luxurious name in the fashion industry, and the Chanel Suit was reinvented every season.

Fiona Campbell-Walte is not a luxury brand owner, nor was she a famous actress. But instead, she is one of the biggest models of the 1950s, where she could bring up to £2000 per shoot and mind you, this was big, big money back then. She’s also the pretty face you see on Pinterest when you look up 1950s fashion, and that’s how you know her legacy lives. 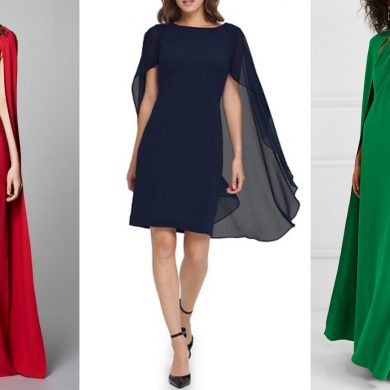 A Quick Guide on Cape Dresses: The Superheroine